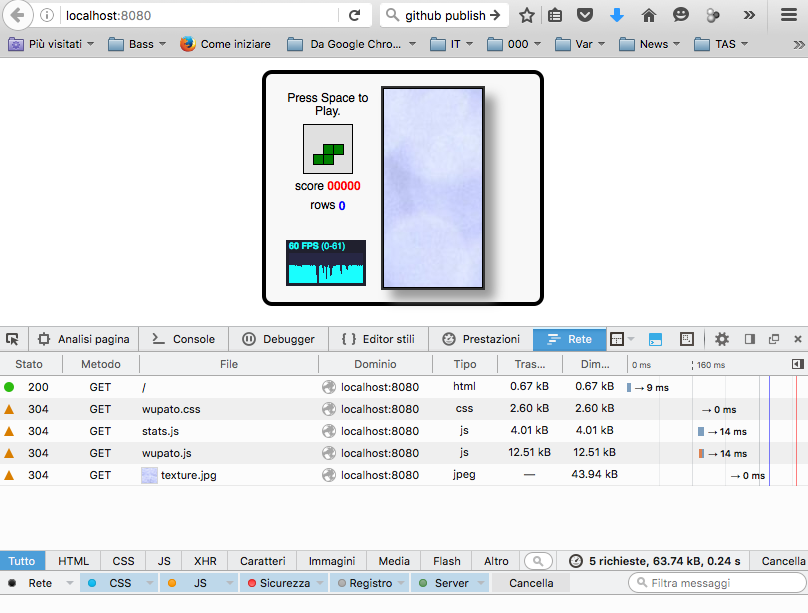 I’ve been reading about golang for a while now, ever since it was announced by google. One of the downsides of my previous job was that we were totally focused on building our software in a way that would be compatible with ALL of our client’s OS/Hardware combinations. This led me to focus mostly on C++ and Java, yet the itch to study golang remained.

I’ve since written a couple of programs: stuff that monitors my router for weird behaviour and a couple of one-off programs. Why not try something more interesting.

One of the first programs that one typically writes to try out a new programming language is a tetris clone. Now, github is full of these so why not try something more akin to what suits golang best: an online game where people can play simultaneously, interacting with each other. Not exactly a new concept, yet a nice project.

First of all we need to define the basic workflow of the game:

We won’t be writing everything from scratch, as there is an existing, reasonably documented implementation of the basic gameplay at the codeincomplete blog.

So we start by serving files using golang. To do this, we first split up the files so that we can serve static content from a different subdirectory.

We create the following directory structure:

We place what’s left of index.html in a newly created templates directory.

Now we need to fix some paths, we add a reference to our css in the index.html file like this:

Finally, we fix the path to the texture.jpg file in wupato.css to point to ../img/texture.jpg as the path is relative to our css file

Now that we have the files ready, we can add some go code to serve them.

We will be using templates for the html files in the future, so we start with a simple template handler type that implements the http.Handler interface. We use the sync.One object to load the template once the first time the type’s ServeHTTP method is called.

Then we use the gorilla/mux muxer to serve static files and the index.html file and call the http.ListenAndServe function to accept incoming connections.

We also want to have logging of what goes on so we add the CombinedLoggingHandler from gorilla/handlers to our existing handlers.
The final code is:

The code for the server is available on github.

This website uses cookies to improve your experience while you navigate through the website. Out of these, the cookies that are categorized as necessary are stored on your browser as they are essential for the working of basic functionalities of the website. We also use third-party cookies that help us analyze and understand how you use this website. These cookies will be stored in your browser only with your consent. You also have the option to opt-out of these cookies. But opting out of some of these cookies may affect your browsing experience.
Necessary Always Enabled
Necessary cookies are absolutely essential for the website to function properly. This category only includes cookies that ensures basic functionalities and security features of the website. These cookies do not store any personal information.
Non-necessary
Any cookies that may not be particularly necessary for the website to function and is used specifically to collect user personal data via analytics, ads, other embedded contents are termed as non-necessary cookies. It is mandatory to procure user consent prior to running these cookies on your website.
SAVE & ACCEPT